Economic Relations between India and Germany 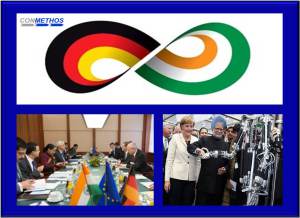 Indo- German Chamber of Commerce (IGCC) has eventually expanded into the largest foreign chamber of commerce and trade in India and has also become the largest German bi-national Chamber globally. In 2006 the IGGC celebrated its 50th year of trade and commerce relations; in 2011 it celebrated its 55th. India also partnered with the Germans in the 2006 Hannover Fair, which is recognized as the world’s largest technology fair. The IGGC have set up a goal to achieve trade up to 20 billion Euros by 2012.

The bilateral trade relations between India and Germany have remarkably increased over the years and both Indian and German firms have had their share of investment. Indian exports to Germany have seen an incredible growth in 2010, recording a total increase of 21.5%. The figures of total exports have touched to 6.2 billion Euros.

Germany, which is one of the world’s leading exporters, stands on the fifth position globally as India’s trade associate. It is also the largest trading partner within the European Union. Germany shares a notable 11 per cent of the total business dealings between EU and India. German exports to India grew to €8.1 billion Euros.

The best and latest information about the Germany India Trade by Conmethos, your company for trade in India and Germany and business publishing.